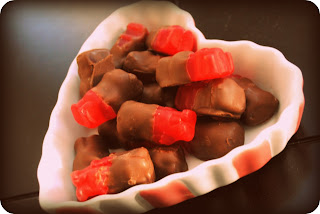 For Valentine's teacher gifts this year I am making chocolate covered cinnamon bears and giving them "Bear Hugs"! Everyone likes a hug, but everything is better when its covered in chocolate.  They are super easy to make and cheap!! I bought a 5 lb bag of cinnamon bears at Kings Soopers or Walmart for $3.99--wowza that is a lot of bears.

But don't just stop at giving these bear hugs for Valentine's day. I like to put one bear hug in my kids lunch--just because what kid can't use a bear hug at school!! They make fun teacher appreciation gifts or mother's day gifts.

Here is the recipe:
11 oz bag of milk chocolate chips--I prefer ghiradelli's
1/4 cup shortening
melt in microwave for 2-3 minutes on 50% power stirring occasionally
Then dip each bear halfway in the chocolate and let dry on parchment paper and put in fridge to harden the chocolate.
*I have also used milk chocolate melting disks (like Wilson's brand from Walmart or Joann's) and follow the same directions, except you don't need to put in fridge.


Now here is the best thing about looking at these little cuties, you can really just look at them here and then feel like you are eating them up....and according to a show I watched on PBS (a little weird that I watched a show on PBS I know) that was talking about the future of avatars and online world (which is really quite creepy to me but I liked this part of it) research has showed that people who experienced eating online actually felt full in real life and the pleasure of eating etc.. as an avatar carried over to real life----hmm..... Dot said something about pretending to eat a cupcake and not having any calories from it...well Dot you are so validated now by PBS! So maybe if you stare at the pictures of these chocolate covered cinnamon bears long enough you will feel like you actually ate them too! And then they are calorie free and cute and if that's not a win-win, I don't know what is!


P.S. Guilty confession from Dot:  Glitta brought me that cute little plate
of Bear Hugs and I've finished them all while working on blog posts
tonight.  Sad for me, but it should tell you how scrumptious they are!